Robert De Niro has kept his word. In May last year he agreed to come and try the priceless meal which Madrid Fusión Alimentos de España offered him in exchange for taking part in the promotion of the most important gastronomic congress in the world. The creators behind this offer, Quique Dacosta – who organized the meal -, Mauro Colagreco, José Andrés, Joan Roca, and Martín Berasategui, presented De Niro with a one-of-a-kind meal he’s sure never to forget.

During more than three hours De Niro took part in this priceless experience at the royal suite of the Mandarin Oriental Madrid, where he stayed with his partner, Tiffany Chen. He cut ham, savoured the Dénia red prawns boiled in sea water by Quique Dacosta, asked to dip bread in the kokotxas that Martín Berasategui prepared, and devoured the Ribadesella eels that José Andrés managed to bring thanks to La Huertona. The actor came ready to have a good time. The minute he walked into the room, even before taking a seat, he joked: ‘I’ll take all the leftovers with me in a doggy bag!’. Then, during the meal, he stood up several times to take pictures of the chefs’ dishes. He was friendly, utterly interested in the products and incredibly surprised by the presentation, flavours, and textures of the dishes.

The star of Goodfellas, Taxi Driver, Raging Bull or Godfather 2 showed his enthusiasm for the culinary delicacies prepared by the five chefs for more than three hours. The plates made their way out of the dining-room looking totally empty. Only José Andrés couldn’t be there, but his cuisine attended the event instead.

The five chefs had agreed on the content of the priceless meal three weeks before over videoconference, when they chose the most iconic dishes of their cuisines based on seasonal products.

The records of the priceless meal will bear testament to the 16 dishes that were served that day. The experience was introduced by a series of appetizers based on local products, such as Iberian ham 5J from 2018 and Olavadía cheese from Quesería Quesos y Besos -  ranked best cheese in the world by World Cheese Awards 2021, which they ate with bread from Panem, best bakery of 2019, and accompanied with an equally sublime wine: Dom Pérignon Plenitud 2, 2003 of pinot noir, chardonnay, and pinot meunier from the AOC Champagne.

After that, the chefs brought the starters. In particular, Quique Dacosta presented his salted fish in saline atmosphere and sun-dried tomato, accompanied by a González Byass Viña AB Estrella de los Mares Palomino Fino from the DO Jerez-Xerez-Sherry, the cava that has sailed the seas and oceans of the world while on board of the Spanish Navy training ship Juan Sebastián de Elcano.

The other three chefs presented their most representative main courses: viennette of white asparagus and truffles by Joan Roca, beetroot with Osciètre caviar sauce by Mauro Colagreco, and caramelized millefeuille of smoked eel, foie gras, spring onions and green apple by Martín Berasategui. This first part of the priceless meal called for a change of glasses in order to try one of the most unique Spanish wines, a one-of-a-kind vintage: López de Heredia Viña Tondonia, Blanco Gran Reserva 1964, Viura y malvasía, from D.O.Ca Rioja.

The symphony of flavours continued with another emblematic wine, Vega-Sicilia Único 1989 of tinto fino and cabernet sauvignon, one of the best vintages of the D.O. Ribera del Duero. They proceeded to taste the delights prepared by José Andrés (strawberries with cream and sea urchin), Quique Dacosta (Dénia red prawns boiled in sea water), Joan Roca (a whole prawn: prawn marinated with rice vinegar, head juice, crispy prawn and seaweed velouté), and once again José Andrés (smoked elvers with tear peas and soy cracklings). 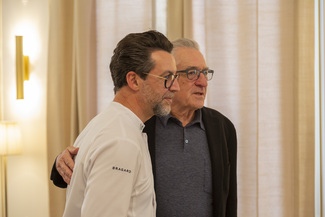 The hake loin with kokotxas, coffee emulsion and scales of paprika by Martín Berasateguiand the Senia variety rice with ashes of black truffles from Maestrazgo by Quique Dacostaput an end to the savoury part of this breathtaking gastronomic experience at the royal suite of the Ritz.

“This is not a meal, it’s an unbelievable experience that I would recommend to anyone who has the possibility to enjoy it”. This is how Robert De Niro described this gastronomic adventure that neither he nor the chefs will ever forget. From now on, Bob is one of us.